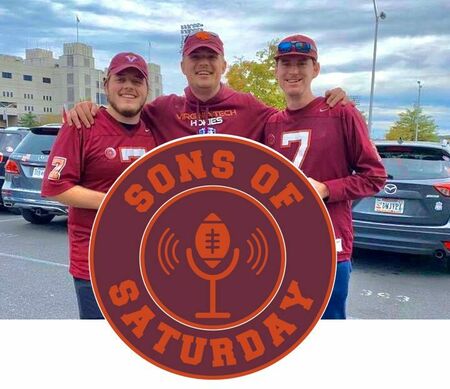 Sons of Saturday began as somewhat of an accident. The idea for the podcast stemmed from weekly phone calls between three die hard Virginia Tech Hokies - Pat Finn, Grayson Wimbish, and Billy Ray Mitchell. Pat would call in from Arlington VA, Grayson would call in from Los Angeles, and Bill would join from Atlanta. On these phone calls, the trio discussed all things Virginia Tech athletics - whether it be coaching, recruiting, facilities, road trip memories or upcoming games. Billy Ray had been active in the podcast game for a while at that time, and pitched both Pat and Grayson the idea of starting one centered exclusively around Virginia Tech Athletics - however, it garnered only minimal interest at first.

Suddenly, that all changed over the course of one weekend. On a fall Saturday in Athens, Georgia, Pat and Billy met in dawg town to watch the Georgia Bulldogs take on the Notre Dame Fighting Irish. The game was a spectacle to behold, and an atmosphere that every die-hard college football fan dreams about. Soon after the game, an announcement from Virginia Tech’s athletic director Whit Babcock declared that Virginia Tech would be playing against SEC opponents in upcoming series spanning over the next two decades, with match-ups against the likes of South Carolina, Ole Miss, Alabama, and Vanderbilt. Absolutely ecstatic about the time spent in Athens and the announcement from the athletic department, the three of us decided to combine our unique personalities and perspectives into what would eventually become the Sons of Saturday. The rest many would say, is footballery.