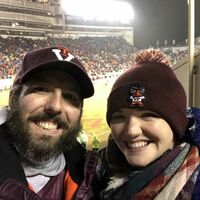 My Dad graduated from Tech in 1981 and I’ve been attending Virginia Tech sporting events since I first moved to Blacksburg in 1988. I myself graduated in 2008 with a Communication degree. During my time as a student I was the Sports Director for WUVT and helped establish and run Planet Blacksburg, an independent student-run news website. I’ve since written for numerous publications including SBNation, Inside The ACC, and Sports Illustrated's AllHokies. Currently, I host The Justin Cates Show in addition to other contributions here at Sons of Saturday and various other sites as the need arises. I now live in a fortified compound in upstate New York with my wife and numerous animals. The smell of popcorn makes me think of Cassell.

The Hokies pulled off the first signature win of the Brent Pry era Saturday with a 23-22 road upset over Liberty.

The Hokies struggled again in a 24-7 loss Saturday at Duke.

The Hokies blew an 18-point lead and have now gone winless in October for the first time since Harry Truman was in the White House. Glimmers of hope exist, but questions abound.

The result wasn't pretty in a 45-29 loss to Pittsburgh, but there was plenty to be encouraged by about the Hokies if you were looking.

There isn't a ton to say about the North Carolina game. It feels bad but time to move on to...oh no...a road game a Pitt. We make a pick and look forward to Hokies men's and women's…

JC Show: We've got answers for the ground game woes.

This week we pose some solutions to Tech's brutal running game, talk about the trip to North Carolina, and unintentionally rename the hurricane.

It was a deflating night for Hokie nation as Tech fell 33-10 to West Virginia.

We broke out the Starter jacket and 96' Orange Bowl hat for this one. Come for the gear, stay for the classic highlights.

It was a standard Tech performance in this kind of sleepy early game. We take a look at some of the good and bad from a 27-7 win over Wofford.

Brent Pry has his first win as a head coach and the Hokies have their first win of 2022. Let's take a closer look at the 27-10 win over Boston College.

ODU = All Aboard the Pain Train

Hokie Nation is down after a brutal season opener for football, but hope remains! We turn the page to Boston College and honor a great Hokie gone too soon in Cyrus Lawrence.

The Hokies opener was a major disappointment. Justin Cates takes a look at the damage.

A Look Back and A Look Ahead

The Justin Cates Show is back with an interesting new space and a look back at a recent road opener with results worth repeating.

Football season is shockingly close, but there's still plenty of time to lose your way in the off-season desert.

After the ACC Tournament title, Tech fans started asking if it was the greatest win in school history. We took a walk down memory lane to put the latest W in context and answer the question, was this the…

Justin gives a behind the scenes look at the show from 2021 and looks forward to a prosperous 2022.

The final Cheers and Jeers of 2021 takes us through the last game in another lost season for Virginia Tech football.

The Hokies have a new football coach while the Cavaliers are suddenly on the wildest coaching carousel ever. Plus we've got an ACC Championship pick!

This game was big, dumb, and a whole lot of fun. It will go down as a classic chapter in the Commonwealth Cup rivalry and will not soon be forgotten by either fan base, albeit for very different…

When it rains it pours. That was certainly true on this night for the Hokies despite a valiant effort in an incredibly tough situation. It wasn't all bad, but there was a lot to dissect with a critical…

J.C. Price will lead the Hokies down the stretch. Justin Cates discusses that news, picks the Tech-Miami game, and briefly recaps an outing in the wild west.

The Hokies did senior day right and sent their upperclassmen out with a resounding 48-17 win over Duke.

Just when you thought things might be getting better, the Hokies go and do something like this. Another rough night in Chestnut Hill leaves Hokie Nation crying foul.

Justin is headed west this weekend but before he went he had some thoughts about Virginia Tech basketball plus the Hokies and Boston College.

It wasn't always pretty but the Hokies got a massively needed win Saturday at Georgia Tech.

Another tough loss leaves Tech fans up in arms. It's all over but the shouting this season.

It was a brutal slog and a 28-7 Tech loss that was easily the most forgettable homecoming in quite a while.

Sons of Alliteration (and Pitt Previews)

We've got game picks, a public shaming of Schefter, and a new feature to remember happier times in #Hokies football history.

After another tough, late loss cheers and jeers is back with one long jeer to rule them all.

Justin checks in on the Urban Meyer situation with some outside help, plus we've got game picks and reminders of some of the great events happening this weekend in Blacksburg.

Sons of the BYE Week

With Virginia Tech on a break, Justin picks a bunch of games from around the country ahead of a huge weekend of college football and checks in on #Hokies Twitter.

Another flat outing leaves the Hokies with big issues to address heading into the bye week.

There are those days when the sun is shining, the tailgating is bountiful, everything is glorious...right up until kickoff.

This week Justin wears an ancient shirt, worries about sports riots, and picks a few games of note including Virginia Tech vs. West Virginia.

It wasn't always pretty, but at the end of the day Tech got a solid win over Middle Tennessee. Justin Cates has some initial thoughts after the game.

On this week's Justin Cates Show we talk briefly about the Hokies and Middle Tennessee, the other intriguing games in the ACC this week, plus Carolina Karen who made waves with an ill-advised tweet which found…

The scene of a full Lane Stadium jumping to Enter Sandman was as close to normal as we come anymore and just as good as expected. For a few hours on a crisp early-September night, the Hokies played intense and…

After a lengthy hiatus the Justin Cates Show is back with a tip for Hokies' Twitter complaints, updates on Virginia Tech softball and Women's golf, plus a thought for the class of…

By Justin Cates | May 24
Alumni

Cassell Coliseum due for much needed upgrades

One of the key projects in Virginia Tech's newly announced "Reach For Excellence" campaign is a $75 million renovation of Cassell Coliseum. ﻿The overall funding campaign looks to infuse $400 million into Tech…

While we eagerly await the return of men's basketball, check out this week's show filled with winter driving tips, advice for handling 'the olds', and a run down of some of Tech's ranked…

This week we talk basketball, JC Price, and I make a big game pick. Plus I encourage people to listen to the latest Weezer album because I'm hip and with it.

MLS Draft Talk and the Hokies Head to Syracuse

This week we talk about the MLS SuperDraft, Virginia Tech basketball, Jim Boeheim, and of course more Buffalo Bills football chatter because the people demand it.

Hokie Hoops and Circling the Wagons

We highlight a big week of news including Hokies' win over the Duke Blue Devils, the top ten wrestling program, Jack Tyler's promotion, plus alumnus Nickeil Alexander-Walker going off in the…

Three Cheers and Minimal Jeers for Virginia Tech vs. Virginia

379 days. That's how long ﻿﻿the Commonwealth Cup was in Charlottesville. It was entirely unnatural and apparently disrupted the universe so much that 2020 happened. Now all is back as it should be. Well,…

Justin ﻿tells a story from his 2005 trip to Charlottesville that really encapsulates the Tech-UVA rivalry. Plus the pick for the game as well as a big time ranked match up between North Carolina and Miami.…

Three Cheers and Three Jeers for Virginia Tech vs. Clemson

There were a few fleeting moments early when if you squinted a bit it looked like real Virginia Tech football. Then everything else happened.

Basketball Season (and Clemson) is Upon Us

On this week's show we briefly talk about the Hokies' great starts in men's and women's basketball, give our VT-Clemson pick, ﻿﻿and try not to act overly thirsty for a guest appearance on a Mike McDaniel…

It's Jeers All The Way Down for Virginia Tech vs. Pittsburgh

The game against Pittsburgh ended. That's the only positive thing one can say about it. There's lots of other stuff to talk about though.

How Will the Hokies Fare in Pittsburgh?

On this week's show we discuss the Hokies-Panthers match up as well as NC State-Liberty which should be interesting. Plus we plug the scribes' work and that new podcast you may have heard…

Three Cheers and Three Jeers for Virginia Tech vs. Miami

The Hokies once again fell short in a close game in Lane Stadium falling to No. 9 Miami 25-24. Justin again has the good and the bad in a game that saw plenty of both.

Check out this week's show where Justin rambles on about Tech's chances against the No. 9 Miami Hurricanes, the North Carolina-Wake Forest game, and quickly brushes past last week's clunker against the…

Three Cheers and Three Jeers for Virginia Tech vs. Liberty

The Hokies flamed out against Liberty and while this week's column is a little heavy on the jeers, there are still a few positives to take away from a gut-wrenching 38-35 loss.

Three Cheers and Three Jeers for Virginia Tech vs. Louisville

The Hokies got a nice road win against Louisville 42-35 in a game that threatened several times to become a Tech blowout. We discuss Hendon Hooker's bounce back, the return of "big play" Tre, and yeah the…

Time to rest up for the weekend as I give you my Halloween costume complete with mediocre acting. Apologies to the great Bob Uecker. We make picks for Virginia Tech-Louisville as well as the suddenly very…

Virginia Tech let uncharacteristic turnovers and penalties doom them in a 23-16 loss to Wake Forest in Winston-Salem.

This week's episode of The Justin Cates Show﻿ features golf talk, plus a preview of Virginia Tech-Wake Forest, North Carolina-NC State, and Notre Dame-Pittsburgh mainly as an excuse to insult both…

The Hokies ran to a resounding victory over Boston College. As always, there were good things and bad after a fun night in Blacksburg.

Sons of bias? An ode to the peanut gallery

Can the Hokies right the ship at home against Boston College? Will Miami lay an egg? Are the Sons just a bunch of homers? Watch the show to find out.

Virginia Tech's defense was embarrassed in a 56-45 loss to North Carolina.

Give this week's episode a watch as we look at Sam Howell, Hokies-Heels, Miami-Clemson, and review some weird Hokie memorabilia.

Three Cheers and Three Jeers For The Hokies Win Over Duke

This week we debut a new postgame feature where we highlight three positives and three negatives from the Hokies' performance. There are plenty of things to be happy about after a 38-31 road win, but that…

Can the Hokies go 2-0 against Carolina teams?

This week we again pick a couple of games, Introduce a new stats segment, reflect on last week's effort by the Fighting Gobblers, and I defend blue cheese against slanderous…

If you've been in dire need for irreverent sports content about the Hokies along with the rest of the ACC, you're in luck! The Justin Cates Show is your portal to strange observations, rambling anecdotes, and…

Latest from the podcast

Hokie Hoops: Hok’s over Goph’s & the Heels heading to Blacksburg