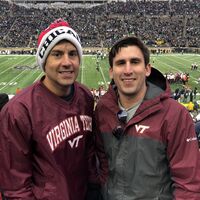 
predetermined at birth by his grandfather Calvin McKinley Stowe (Class of 1950, started in 1942

before an opportunity to study abroad in the Pacific) and mother, Rosalind Stowe Manning

(Class of 1990). Growing up in the heartland of the ACC, he was a loyal fan at away football and

Blacksburg, the favorite being the November 2003 dominate victory against Miami. While in

school Parker was member of the Corps of Cadets, a brother of Alpha Tau Omega and studied at

the Steger Center in Riva San Vitale, Switzerland. He is now a third-year law student at the

University of South Carolina before serving as an Army Judge Advocate. In addition, Parker

serves as the Vice President of the Columbia, South Carolina Chapter of the Virginia Tech

The bond amongst Hokies is often so strong that it becomes generational. In 2022 Virginia Tech will celebrate 150 years as the land grant university for the Commonwealth. This is the story of how Virginia Tech…

Latest from the podcast

Hunter Cattoor: Athlete of the Week

Hokie Hoops: Back in the W Column

What does the 12 team playoff mean for Virginia Tech?